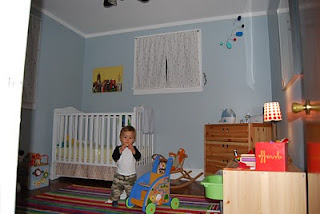 Mobile lovers come in all shapes, sizes and ages, but call this lil' guy "baby" and you might be in for trouble... toddler trouble with a capital ummm, er, well, give him a break... he doesn't know his letters yet... but I know for a fact it's a capital T!

I mean, really, check out those tough-guy camo pants and that "take no prisoners" look on his face! See how that cracker trembles in his fearsome grip! Take a look at how he's already thrown his so-called "baby monitor" to the ground and stomped it under his menacingly striped feet. And, of course, he's already broken out of his white-walled prison... leaving his furry yellow friends behind bars without a second thought.

And, if that's not enough, I encourage you to look over his shoulder to see who's in his toddler gang... when was the last time you saw an orange monkey wearing a wrestling onsie? Plus, does that monkey have a 5 o'clock shadow?!

It's always fun to see my mobiles - don't call it a baby mobile - hanging in the real world. Thanks to a dear client for sending this fun photo of my "am i blue" mobile (sporting a splash of panache with a red dot) swirling in their son's admittedly very hip room. Heck, *I* don't even have a bedskirt, but he has one AND it even matches his curtains, too! 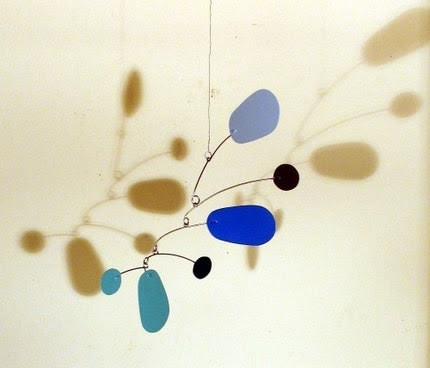