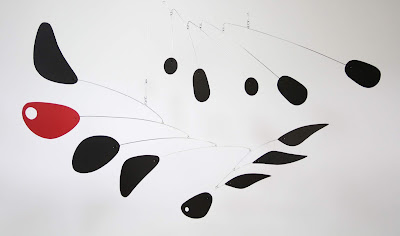 Mobiles: The Classic, and The Kerf


On lines
“But what if I don’t want to cross it,” asked crow.
And fox laughed because she knew he was in one of those moods.

Thoughts while making
Years ago, I heard the story of a famous artist living in Paris. Every morning, he would get on his bike and ride from his home to his studio. Each night, he’d make his way back again.

This artist was very busy, so as one might expect, he took the exact same path to and from his studio. It was, after all, the shortest distance between here and there.

Well, one day – and I don’t recall why – he started tracing his path with a black pen on a paper map of the city. Over and over (and over) again, every day, each night, he’d draw + re-draw that very same route on that map with that black pen.

As you can imagine, over time, the lines connecting here and there became darker and thicker and darker and thicker, and eventually they began to change the map itself; the ink covering street names, landmarks, parks, and whole blocks at a stroke.

Seeing this one night gave the artist pause. And an idea. The following day, he got on his bike and took a different route to his studio. When he later traced it on his map, he laughed out loud.

From that moment forward, he took a different path to and from his studio every day. And while his map became an art piece in itself – filled with joyful squiggles and whimsical twists + turns – something else happened, too.

See, he realized that – in his rush to get from here to there – he missed the between. It’s a cliché story, I guess, about what happens when you invest in the experience of the journey, rather than the destination alone.

I was reminded of it today as I was thinking about our “stay at home” time that invites us to rethink how we ink the lines that connect here, there, and the in between.

This mobile is normally all black. The customer asked me to pick up my pen and take another route. And what a difference one small color change has made.

As you think about the ink you’re laying down in the world – with your thoughts, your actions – is there one place today you can pick up your pen to make a change in your life or that of others?
Posted by Mark Leary at 8:14 AM