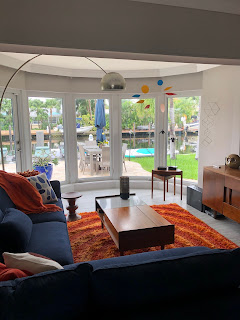 Mobile: The Wham in Wilton Manors
On presence
“I’m right here,” explained fox, impatiently.
“Are you sure about that?” asked bear.
Thoughts while making
I’m not sure how long I was talking to him before I realized he was a trashcan.
I’d done this before. Last time, it was my gray foam roller. And before that, it was the brown planter right outside my workshop.

I was telling him something about the weird dream I had and how I needed coffee stat.

However, as I said, “he” was a trashcan.

But, that didn’t stop me from wondering why he wasn’t following me down the hall to the kitchen. That’s when I turned around, realizing I’d been talking to small, black bin and not a large, black cat.

Buddy (the cat, not the trashcan) and I have been sharing space for 12 years now. And that’s why I expect to see him. Why I anticipate where he will be based on where he has been. Why I make assumptions – that feel more like facts – about how he’ll greet me in the morning, at the door, in the yard.

As a result, I see him often when he is not there. In the shadows, around the corner, in the periphery. Or even as I did today as I was looking at this photo a client sent me, imagining he was the dark spot under the patio table overlooking the canal.

“You are not a cat,” I tell the trashcan. “You *are* a cat,” I tell Buddy as he appears from nowhere and weaves between my legs. Sometimes it’s as simple as that to regain the present: naming what is and what is not.

What’s one thing that’s *not* in front of you right now that you wish was or vice versa?