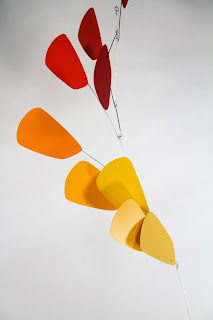 Mobile: The Phoenix (Winter 2019)
On traditions
“But it’s just a candle,” said rabbit.
“Is it?” replied crow, “Is it really *just* a candle?”
Thoughts while making
Years ago, I paid my sister 5 bucks to eat it. She only took one bite. I think she gagged. But she took the money anyway. It was Christmas Eve.

The following Christmas, I offered her $10. She refused. And she hasn’t eaten it since.

My dad, on the other hand, loves it. He could eat an entire vat of it. Probably has. And will again. But he likes slimy things—like flan and persimmons, but not runny eggs.

I ate it. But, since I don’t do dairy or animals, it’s a memory now. One I cherish.

Start with one small box of lemon Jello and one lime. Use 1 cup of water in each instead of 2.

My grandma Camas, my dad’s mom, Lillian Pedrazzi, was born in 1913, and married a fourth generation Californian. They lived in a grand house in St. Francis Wood in San Francisco. She was the first to make it for my dad, and his 4 siblings. Her tailless Siamese cat, Saymiew, watching on skeptically.

I broke my arm in that house. I was 3. My Uncle Bruce, a long-haired studio musician for folks like the Dead Kennedys and Black Flag, was chasing me. I tried to climb a garden hose up a fence to get away. I almost made it.

For my entire life, every fall, every winter, this one dish makes us laugh. Each new generation of Learys baptized by it, watching it jiggle and glow.

A few years ago, I made it for a holiday party. One of my neighbors was there. A former marine, proud, yet quiet. When he saw it on the counter, he started to cry.

His mom, it turns out, made the same recipe every Christmas. Like ours, it was a family joke and treasure. She had passed the week before.

His mom called it “Green Fog.” My grandma called it “For Goodness Sakes.” There are many variations of the recipe. And a quick web search turns up many references to “one of the oddest dishes my grandmother made.”

Traditions are wick and flame, past made present, and whatever you want them to be. What’s one family tradition that comes out each holiday?